In 2015, EBD considered Pena Palace in Sintra (Lisbon – Portugal), the Most Beautiful Castle in Europe.

Found in the Sintra slopes, the Park and Palace of Pena are the tree grown foods of King Ferdinand II’s inventive virtuoso and the best outflow of nineteenth century sentimentalism in Portugal, meaning clear impacts from the Manueline and Moorish styles of building design. The royal residence was inherent such a path as to be noticeable from any point in the recreation center, which comprises of a timberland and lush arrangements with more than five hundred separate types of trees beginning from the four corners of the earth.

The Palácio Nacional da Pena (Pena National Palace) is an unpredictable royal residence implicit the nineteenth century for Dom Fernando II, associate of Queen Maria II of Portugal. The royal residence is one of a few in the town of Sintra, just 20 minutes from Lisbon. 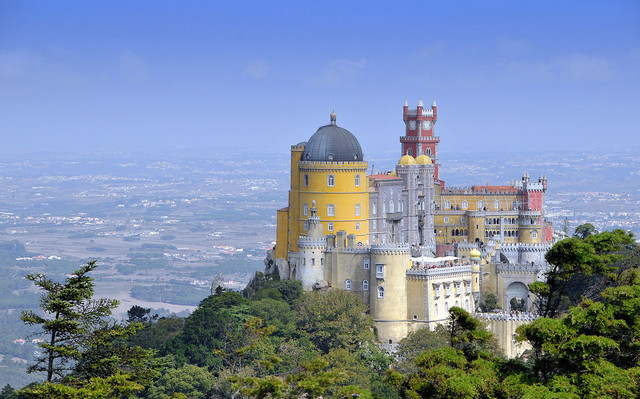 Regardless of the mishmash of recovery styles, the royal residence looks shockingly agreeable. It’s an intriguing structure, with an amalgam of inquisitive looking towers, turrets, onion arches, oriental curves and crenelated dividers. The utilization of yellow, pink and purple pastel hues finishes the fable character of the castle.

The heart of the royal residence is framed by the Gothic shelters, improved with fired tiles. Close to the groups stands the extensive clock tower. To the south of this tower is a substantial entryway, known as the Triton Gate, flanked by two domed towers. The entryway is lavishly embellished in Manueline style and demonstrates a noxious looking triton on top of an extensive ocean shell supporting an inlet window. There are a few different entryways in the castle, all in an alternate style, from oriental to medieval styles.